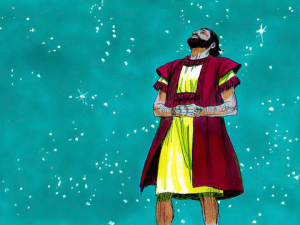 Read Together: God promised to make Abram a great nation, saying that all the nations of the earth would be blessed through him. God showed Abram all the land of Canaan and promised it to his descendants. Abram had traveled throughout the land of Canaan for 24 years, and now he was 99 years old. God had promised that his descendants would be as numerous as the sand on the seashore, but he still did not have a son. It was at this time that God appeared to Abram and expanded the promises. He told Abram that he was going to make him a father of many nations and that some of his descendants would be kings. God changed Abram’s name to Abraham and his wife’s name, Sarai, to Sarah, to reflect the promise that many nations would come from them. God told Abraham that he and Sarah would have a son the next year, and they were to call him Isaac, which means laughter. Perhaps Isaac was given that name because both Abraham and Sarah laughed when they first heard they would have a son. The next year Isaac was born, just as God had said. Isaac was the beginning of the fulfillment of God’s promises to Abraham.

Review Memorization:  Hebrews 11:17–18  “By faith Abraham, when he was tested, offered up Isaac, and he who had received the promises offered up his only begotten son, of whom it was said, ‘In Isaac your seed shall be called,’ concluding that God was able to raise him up, even from the dead, from which he also received him in a figurative sense.”

Children’s Bible Lessons – Level 2: Lesson 56 “The Handwriting on the Wall”