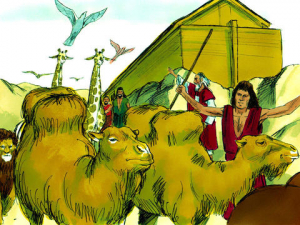 Read Together: Noah had warned the people, but they would not listen. After Noah and his family entered the ark, God closed the door and sealed it. The rain poured down from the sky, and the waters under the earth were opened up. For forty days and nights it rained, and the waters covered the entire earth. No animal that lived on land survived. After being on the water for five months, the ark came to rest on top of Mt. Ararat, which is in modern-day Turkey. Noah, his family, and all the animals stayed on the ark for another seven months while they waited for the waters to recede. Noah had been on the ark for a year, but the first thing he did upon leaving the ark was to make a sacrifice to God and worship Him. God decided that He would never again destroy everything because of man’s wickedness. God made a covenant with Noah, all his descendants, and every living creature that He would never again destroy the earth by flood. The sign God gave in remembrance of the covenant is the rainbow.

Genesis 6:9 “This is the genealogy of Noah. Noah was a just man, perfect in his generations. Noah walked with God.”

Children’s Bible Program – Level 2: Lesson 2 ” Where Did God Come From?”