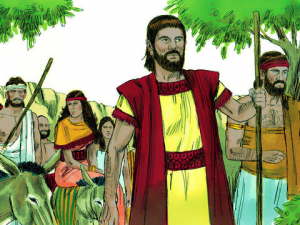 Read Together:  Abram was born 292 years after the flood. His family lived in a city called “Ur”, which was in the area of modern-day Iraq.  He was the youngest son of his father Terah whose ancestor was Shem. Abram married his half-sister Sarai, but they did not have any children. Terah left Ur for Canaan and took Abram, Sarai, and Lot, his grandson, with him.  The family stopped for a while in Haran where Terah died. Abram had become very wealthy in Haran. By the time he was 75 years old, he owned livestock, and had silver, gold, and many servants. This would surely have made it hard to leave Haran. But God commanded Abram to leave his home and go to a distant land that He would show him. In return for his obedience, God promised to make Abram’s descendants a great nation. Amazingly, Abram immediately obeyed God. He simply took his wife, his nephew Lot, and all their possessions and left his home for good.

Heb 11:8 NKJV “By faith Abraham obeyed when he was called to go out to the place which he would receive as an inheritance. And he went out, not knowing where he was going.”