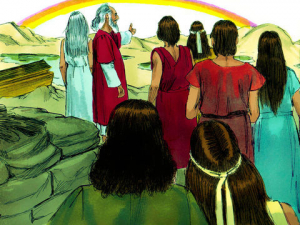 Read Together:  God destroyed every human being on the face of the earth with the exception of 8 people – Noah and his sons, Shem, Ham, Japheth, and their wives.  A pair of every unclean animal and seven pairs of all clean animals survived with Noah and his family on the ark. After the flood, God commanded Noah, his sons, and the animals to multiply on the earth, and that is exactly what they did.  People lived longer so they were able to have many children. Soon families grew so big that they formed nations, and the nations were all separated into their own lands.

Genesis 11:6  “And the Lord said, ‘Indeed the people are one and they all have one language, and this is what they begin to do; now nothing that they propose to do will be withheld from them.’”