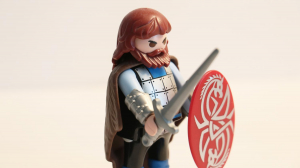 Read Together: After the flood, people began to raise families, and gradually moved further and further away from where the ark had come to rest. The Bible tells us about the families of Shem, Ham, and Japheth, and how they began to populate the earth. We read about one man who became famous as a great hunter. This man’s name was Nimrod, and he was the grandson of Ham, one of Noah’s three sons. As his fame grew, he was idolized by many. In fact, some people began to look to Nimrod instead of God for protection and leadership. They called him “the mighty hunter before [“instead of” or “in place of”] the Lord” (Genesis 10:9). Remember, God had commanded the sons of Noah to fill the earth (Genesis 9:1). But proud Nimrod rebelled against God, building cities and a kingdom. One of the cities he built was the famous Babel, where the people began to build a giant tower, reaching into the sky.

Genesis 11:6  “And the LORD said, ‘Indeed the people are one and they all have one language, and this is what they begin to do; now nothing that they propose to do will be withheld from them.’”

Children’s Bible Program – Level 1: Lesson 24 “The Exodus and the Days of Unleavened Bread”