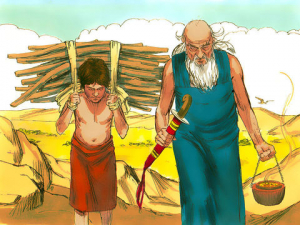 Read Together: God promised Abraham that he would be the father of many nations. God said that Abraham’s descendants would be as many as the sand on the seashore!  Yet Abraham and Sarah were getting old with no heir. In spite of their old age, Abraham and Sarah believed God would fulfill His promises, and He did. Isaac was born when Sarah was 90 and Abraham was 100 years of age. Abraham had waited 25 years from the time God first made the promise that he’d have a son. Ishmael and his mother were sent away, but God promised to make his descendants grow into nations as well. Just as Isaac began to mature as a young man, God told Abraham to sacrifice him on Mt. Moriah. Abraham set out early the next morning to do what God said. No wonder Abraham is called the father of the faithful! Abraham began to carry out God’s instructions, and Isaac, in obedience to his father, allowed himself to be tied up. When Abraham was about to sacrifice Isaac, God stopped him and provided a ram for an offering instead. By Abraham’s act of faith, God knew that Abraham would always obey Him no matter what. Because of Abraham’s faith, God made His promises to Abraham unconditional. That means they would happen no matter what.

Genesis 18:19 “For I have known him, in order that he may command his children and his household after him, that they keep the way of the LORD, to do righteousness and justice, that the LORD may bring to Abraham what He has spoken to him.”