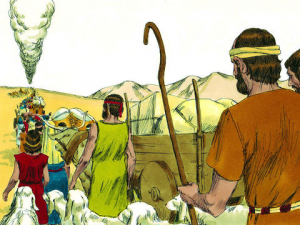 Read Together: Israel did not bring a good report during their wandering in the wilderness. During this time, Korah, Dathan, Abiram, and On stirred up the people in rebellion, saying Moses and Aaron should no longer be the leaders of Israel. God had something to say about that! He caused the earth to open up and swallow these rebellious men, their families, and all their possessions. After the rebellion was put down, the Israelites complained that Moses had killed the people of God. They gathered against Moses and Aaron, but again God saved them and sent a plague that killed 14,700 more people. After a victory over the king of Arad, the people started complaining again, calling the manna worthless. This time God sent fiery serpents through the camp which killed many of the people. After Israel wandered for forty years, the time finally came for them to inherit the Promised Land. God lead Israel to defeat and take the lands of Sihon King of the Amorites, and Og King of Bashan. The Moabites heard of Israel’s conquests and were afraid. Balak, king of Moab, sent for Balaam to curse Israel, but God would not allow it, but allowed Balaam to bless them instead. However, the Israelites started worshipping idols and marrying foreign women. The Lord became angry and sent a plague that killed 24,000 people. Time and again Israel tested God. Israel failed to keep the covenant they had made with God, but their deeds were recorded for our benefit so that we can learn from their mistakes.

Deuteronomy 30:15–16  “See, I have set before you today life and good, death and evil, in that I command you today to love the LORD your God, to walk in His ways, and to keep His commandments, His statutes, and His judgments, that you may live and multiply; and the LORD your God will bless you in the land which you go to possess.”

Children’s Bible Lessons – Level 3: Lesson 56 “The Courage of a Queen”