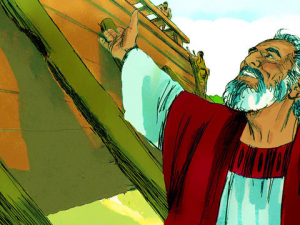 Read Together: There was one man during this wicked age (the time before the flood) who continued to follow God’s laws. His name was Noah, and Noah was a just man. That means he tried to treat everyone fairly, as the Bible teaches us to do, and just like we want to be treated in turn. He followed the example of his great-grandfather Enoch, who had also walked with God. “Walking with God” means that Enoch and Noah loved God and obeyed Him. God says that He shows His servants when He is going to send destruction on people because of their sins (Amos 3:7). Noah was a faithful servant of God, and God told Noah that He planned to destroy the earth with a flood, but would save Noah and his family because of his obedience to God.

2 Peter 2:5 “And [God] did not spare the ancient world, but saved Noah, one of eight people, a preacher of righteousness, bringing in the flood on the world of the ungodly.”

Second Thoughts: The War of the Worlds