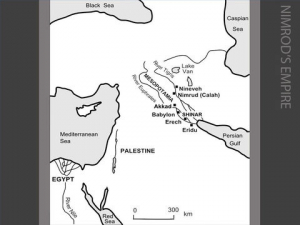 Read Together: The people began to put their faith and trust in Nimrod, and Nimrod began to feel very proud of himself. The name Nimrod can mean “rebel,” and Nimrod was truly a rebel. Nimrod is known in history to be a ruler who turned people from the true worship of God and caused religious confusion. According to some historical sources, he began to gather people together in cities rather than encouraging them to spread out over the earth as God wanted. Initially, the reason for keeping people together might have been for protection. But it soon became clear that Nimrod wanted the people together so he could be a powerful ruler, and he became a cruel tyrant over them. Nimrod set out to establish a world-ruling kingdom and his first city was Babel. He also founded Erech, Accad, and Calneh in the land of Shinar which is near modern-day Iraq. He also took lands in Assyria that were occupied by the descendants of Shem, which included Nineveh, Rehoboth Ir, Calah, and Resen. This was likely not done peacefully, and it is probable that Nimrod introduced war again to the human family after the Flood.