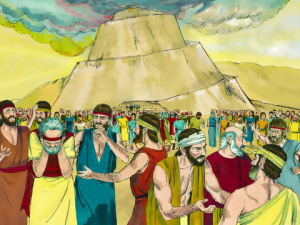 Read Together: The city of Babel was the beginning of Nimrod’s empire, and the beginning of mankind’s post-Flood attempt to govern himself apart from God. Nimrod led the people to build a very tall tower in rebellion against Him. But God was not pleased with their actions, so God decided to confuse the people’s language. They couldn’t share ideas and so they weren’t able to keep working on the tower. The word “Babel” itself means confusion, and you can imagine what happened when God confused the languages. Only those who spoke the same language could understand each other, and God divided the languages along family lines. People stayed with those they could understand, and they began to settle in their own territories as God wanted them to. Needless to say, work on the tower ceased. The Tower of Babel was never completed, but the attitude of mankind’s rebellion against God continues to this day.