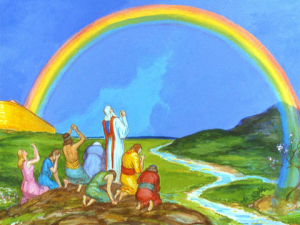 Read Together: Did you know that Noah’s name means “rest”? His name showed the hope his father had that God would use Noah to bring deliverance to His people. And of course, that’s what God did. God used Noah to preserve the human race. When Noah and his family left the ark, God commanded them to be fruitful and multiply. This means God wanted them to have large families. All nations, races, ethnicities, and cultures–all people today can trace their lineage back to Noah. Noah saw many of his children, grandchildren, and great-grandchildren because he lived for 350 years after the flood. He lived a total of 950 years, which was common for people in the pre-flood era. However, after the flood, the length of most people’s life began to shorten. Within about five generations after the flood, people were living less than two hundred years. Noah also lived to see, just as God had said, that man’s heart is inclined toward evil (Genesis 8:21). People did not learn from the problems of the pre-flood world. Not long after the flood, the human family was again walking contrary to God.

Genesis 6:9 “This is the genealogy of Noah. Noah was a just man, perfect [upright, blameless, or wholehearted] in his generations. Noah walked with God.”

Online Focus | The Role of the Holy Spirit
Scroll to top