Recommended Reads: Catastrophe: An Investigation into the Origins of Modern Civilization

You are here: Home1 / Blog2 / LivingEd - Online Learning3 / Recommended Reads: Catastrophe: An Investigation into the Origins of Modern... / Events4 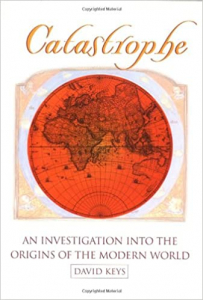 Catastrophe: An Investigation into the Origins of Modern Civilization

We are in a global crisis. The spread of COVID-19 has changed our day to day lives, and it has the potential to greatly impact the future. But this is not the first, nor the worst crisis the world has seen. In his book “Catastrophe,” David Keys delves into the Bubonic plague and the way it changed the world.

It was a catastrophe without precedent in recorded history: for months on end, starting in A.D. 535, a strange, dusky haze robbed much of the earth of normal sunlight. Crops failed in Asia and the Middle East as global weather patterns radically altered. Bubonic plague, exploding out of Africa, wiped out entire populations in Europe. Flood and drought brought ancient cultures to the brink of collapse. In a matter of decades, the old order died and a new world—essentially the modern world as we know it today—began to emerge.

How much do you really know about the Bubonic Plague, and its lasting legacy? This worthwhile read can add a perspective on both history, and the change that one crisis can cause.

The Leaven of the Pharisees and Sadducees
Scroll to top