All Posts
You are here: Home1 / All Posts2 / LivingEd - Charlotte3 / Supporting, Building, and Maintaining: An Interview with Mr. Jonathan ... 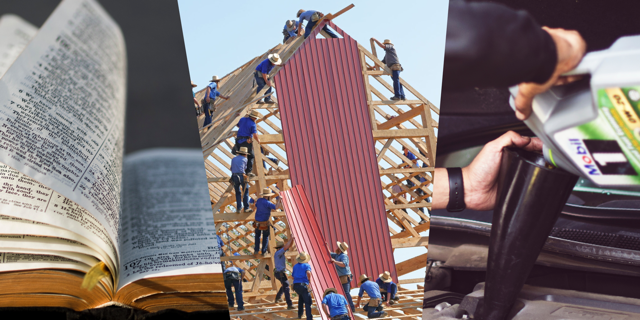 This is the full, uncut version of the interview with Mr. McNair which appears in the September-October issue of the Living Church News, now available at LCG.org.

As the inaugural year of Living Education came to a successful close, we sat down with its director, Mr. Jonathan McNair, who gave us a glimpse behind the scenes of this exciting new initiative as it heads into its second academic year.

A nine-month program, Living Education offers the young adults of God’s Church a unique opportunity to immerse themselves in the study of His word without spending the time and money required for an undergraduate degree.

As one might expect, converting Living University into Living Education came with its fair share of obstacles. “Probably the most challenging thing is to be able to step back and make a fresh start while still respecting the great work that’s gone on before and appropriately using that work,” Mr. McNair said. “It was the same with Living University; there was a desire to do something that was new and different from, say, Ambassador College, while still respecting what Ambassador College was all about. I think we have to do the same now.”

It’s a fine line to walk, and one Mr. McNair takes seriously. “I feel a great desire to take what we can from the eleven years of effort in Living University, yet we do have to turn a corner,” he said. “There are some different demands and we have different scenarios, so we have to make changes that are appropriate—I think that’s challenging, to keep that balance right.”

The challenge of keeping that balance means learning through a bit of trial and error, and Mr. McNair looks forward to opportunities to fine-tune Living Education as the program continues. “I feel like there’s a lot that can be improved,” he says, “and that’s one of the things we’re going to be doing now: Whether it’s curriculum or whether it’s programming, we have to think, ‘How can we synchronize it better?’” Much of this involves incorporating the wealth of learning material developed by Living University. “To some degree, we’ve wanted to take the existing classwork and bring it forward, but that doesn’t always work perfectly, because again, much of the existing classwork was geared for our online audience,” Mr. McNair said. “I think that we can do better this year at making sure we synchronize the material.”

Experience, of course, inevitably teaches us all, and Living Education’s first year in operation has proved a valuable instructor. “There’s a lot that we’ve learned from our first year, and we’ve had some time to prepare things for this second year, so I think there’s much that we can improve on,” Mr. McNair said. “I learned a lot in particular from the first year of my involvement here, trying to switch gears from being a field pastor, so there are many different areas in which I hope we’re going to be able to step back and do better.”

When asked to talk about the most fulfilling result of directing Living Education, Mr. McNair chuckled and candidly replied, “To me, I think it’s just seeing that it actually happened. It’s easy to sit down, try to make plans, and say, ‘Well, here’s what should be done, and here’s what can be done,’ but to see it all actually come to fruition, and everyone work successfully toward an end—maybe that’s sort of too ‘big picture,’ but really, that’s rewarding—to see plans come to pass,” he said. “You know, Proverbs 13:19 says, ‘A desire accomplished is sweet to the soul’ and it really is.”

Finally, we asked Mr. McNair to describe the goals of Living Education as it moves into its second year—and beyond. His response was threefold, beginning with an emphasis on supporting the larger Work of God’s Church. “The main mission of what we do, both online and in the classroom, is to support the leadership of the Church in teaching and maintaining the truths of God,” he said. “We have to ensure that we’re always keeping clearly in mind that we need to work in harmony with the leadership of the Church. We’re part of the Church, we’re not a separate entity that somehow works in tandem or is parallel. We are literally part of the Church, so that needs to drive what we do and how we do it. That’s the first big part of it.

“The second part is building,” Mr. McNair continued. “We cannot assume that everyone is completely, 100 percent ‘filled to the brim’ in every aspect of God’s way of life, knowing everything. None of us knows everything.” Noting that all of us as Christians are constantly in the process of building our lives on the truths of God, he explained, “Whether we’re brand-new to the Church, or we’ve grown up in the Church, or we’ve been in the Church for fifty years, it’s still a building process. That’s really important, and I think, especially, since we’re gearing this program toward younger people, we have to think about building a solid foundation for the future.” A second-generation Christian himself, Mr. McNair knows how important it is for those raised in God’s Church to deeply appreciate His truth. “When we’re growing up in the Church, we learn a lot by osmosis and even by our own effort,” he says, “but we have a chance, here, to sort of fill in the blanks, holes, and blind spots that sometimes we don’t even know we have, because we’ve just grown up with it all around us.

“So, I think building is a big part of it, and then, maintaining—whether it’s our on-site program or online,” Mr. McNair concluded. “If you just keep driving a vehicle and never change the oil, never do any maintenance on it, you’ll drive it into the ground—and it’s the same with us, spiritually and even educationally. We just assume that we know it all, but we forget, and we lose clarity, and we lose focus. That’s what we’re about with Living Education: doing our part to help the Church to maintain the truths solidly, clearly, with focus and renewed energy.”
We at the Living Church News are grateful to have had the opportunity to talk with Mr. Jonathan McNair, and look forward to seeing how God blesses Living Education in the years ahead.