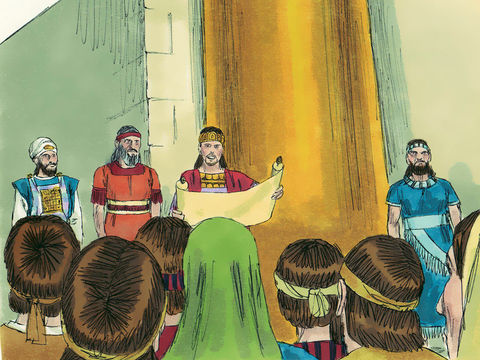 After King Uzziah died, several more kings ruled the land. Some of them were very good, and some of them were very wicked, and caused the people of Judah to sin against God. A king named Amon, who was a very wicked man, only ruled for two years before God allowed him to die. His little eight year old son, Josiah was crowned as king after him. Despite having Amon for a father, Josiah was a good king. By the time he was sixteen years old he was determined to get rid of all the idols so that the people would have to worship the true God. He also wanted to repair the beautiful temple of God to be used once again for the right purposes. One day when some men were cleaning out the temple, they found an old book that had been forgotten and decided to show it to the young king.

Then the king stood in his place and made a covenant before the Lord, to follow the Lord, and to keep His commandments and His testimonies and His statutes with all his heart and all his soul, to perform the words of the covenant that were written in this book.