Welcome to Life, Ministry, and Teachings of Jesus Christ. In this course, you will encounter the original Christianity of the Church in the first century and explore the basic doctrines of Jesus of Nazareth and his teaching of those he prepared as apostles and leaders of the early church. Our collective task is to explore the life, ministry, and teachings of Jesus Christ as presented in the four Gospels in the context of the social, political, and religious conditions of the first century.

The first four books in the New Testament ‒ the Gospels of Matthew, Mark, Luke and John ‒ are the direct revelation of Jesus Christ, the Son of God, the one who died for humanity, the one who now sits at the right hand of God in heaven poised to return soon as King of kings and Lord of lords. You will have the opportunity to explore the Gospels in a holistic manner through a verse-by-verse analysis of the biblical text presented by Dr. Roderick C. Meredith.

Have you ever thought about where you got your ideas about Jesus Christ of Nazareth? Many people have derived their understanding of the Bible’s teachings from what other people have told them, rather than from looking at what the book itself plainly says. This is your opportunity to reexamine your thoughts and beliefs, and to learn about the real Jesus of the Bible and the Gospel message he brought.

INTRODUCING THE INSTRUCTOR AND THE COURSE 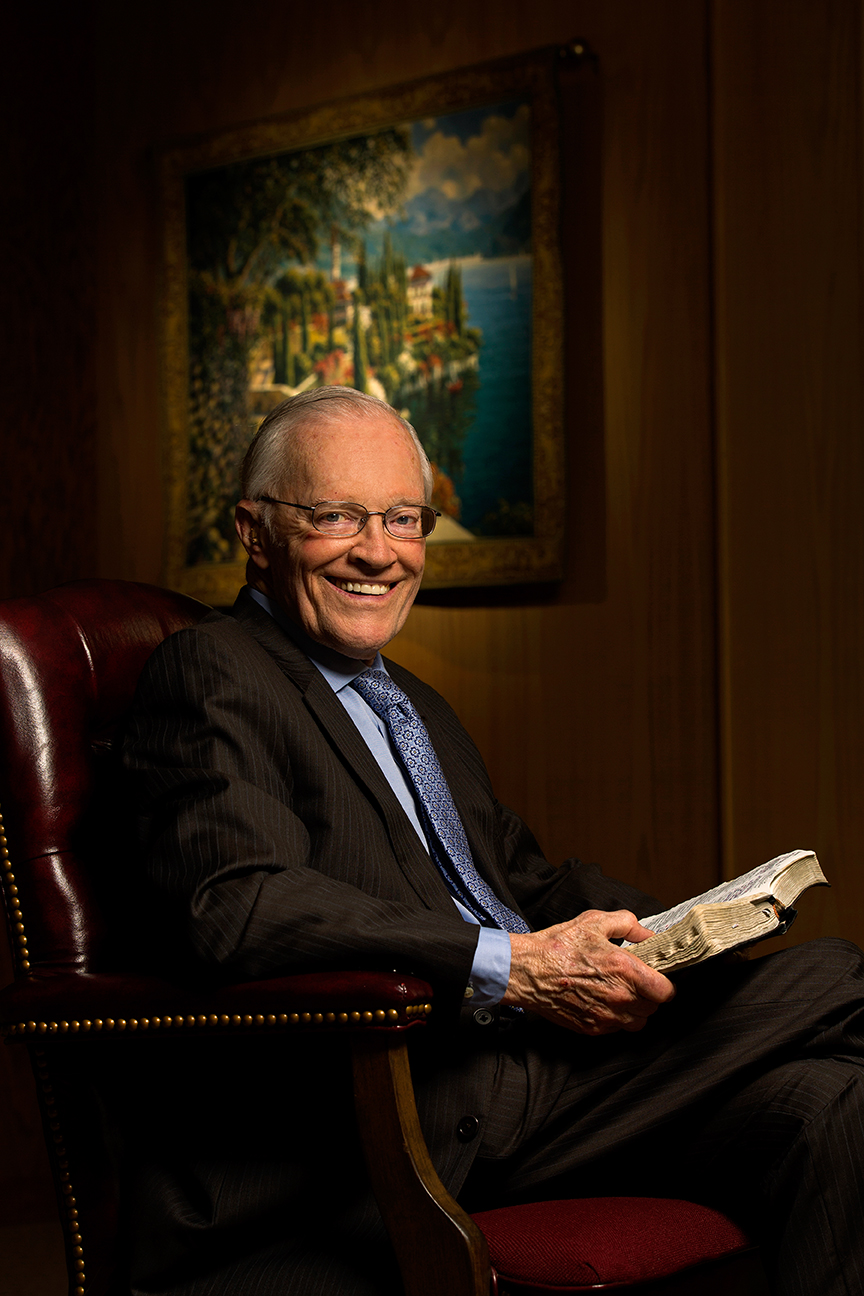 Dr. Meredith was one of the first evangelists ordained by Mr. Herbert W. Armstrong in 1952 and spent 64 years in the Work that Christ began through Mr. Armstrong.  He was active in the Work until his death on May 18, 2017. The Living Church of God, which Dr. Meredith raised up, has more than 350 congregations in 55 countries worldwide.

The Gospels provide important details about the conception and birth of Jesus of Nazareth and we would like you to discern the difference between the factual biblical accounts and their meaning for us as opposed to misconceptions of many traditional Christians and others divorced from the original Christianity of the church. In this lesson we also address the nature of God. This is an issue that some find confusing to comprehend but we want to extend your biblical understanding in this regard. Here you will expose yourself to some geography, history, and learn some details about the biblical text. As a reminder, if you have a question please ask. We are only an email away and we are here to help you.

The biblical world in the days of Jesus of Nazareth was that of the Greco-Romans. It was a world of intense poverty, violence and inhumanity, where human life was of little value and ignorance was rampant. Greco-Roman civilization was cruel, violent, oppressive and pagan. The rights of women and children were virtually non-existent; war, slavery and brutality were ever present.The Jewish people accounted for about seven million, or roughly 10-15%, of Rome’s subjects. A Jewish synagogue could be found in almost every Greco-Roman village and city of signiﬁcant size. Substantial Jewish communities populated Spain, Egypt, Asia Minor and Italy. About a million Jews resided in Egypt, with over 200,000 in the city of Alexandria. Moreover, some two million Jews lived beyond Roman borders to the east as far as India and south into Ethiopia. About one million lived in the land of Israel (Eretz Israel), residing in Galilee and Judea.

The Life, Ministry, and teachings of Jesus Christ will help you visualize the cultural, political and social realities in Judea, Samaria and Galilee during Greco-Roman times to aid you in realizing the context in which the Gospels were written and in which Jesus taught and preached.

Unit One: The Early Life of Christ

Click on the “Lecture” button to view or listen to the lecture for this module. Both a video and audio recording are available for your convenience.  This recording includes an introduction to the topic, followed by a lecture from Dr. Meredith. Listening to the lecture is required in order to complete the module.

By selecting the “Summary” button, you will have access to a page that summarizes the important points from the lesson and also provides additional learning through discussion questions.  Your local pastor or elder has additional information that will be helpful in reviewing the questions, so be sure to use him as a resource in your discussion. Viewing the summary is a required step in completing the module.

Before proceeding to the next module, take a few moments to take the quiz by clicking on the “Quiz” button. This will help you review the important points from this module, by going through 10 questions taken directly from Dr. Meredith’s lecture.  Going through this quiz is a required step in completing the module.

Look for the “Learn More” icon at the end of each lesson.  These components areoptional, and provide further information and recommendations for further study. They are not required to complete the module, but are provided for your interest.

The cultural, political, and social realities in Judea, Samaria, and Galilee during Greco-Roman times were very different than many Bible students envision. The different types of Judaism during this period were not what is thought of as Judaism in today’s world. Different threads of thinking divided the populace into contentious religious factions.

We get a flavor of this division through the New Testament as we read about Pharisees, Sadducees, and Hellenists. Most people were simply not that religious at all, though they lived and breathed the history of God’s work with them through the Law, Prophets, and Writings.

In terms of daily life, the dominant influence was Greco-Roman. In other words, the political system under which they lived was the Roman Empire, but the Greek culture was all-pervasive. It was a world of intense poverty, violence, and inhumanity, where human life was of little value and ignorance was rampant.

The Jewish people accounted for about seven million, or roughly 10-15% of Rome’s subjects. A Jewish synagogue could be found in almost every sizeable Greco-Roman village and city. Substantial Jewish communities populated Spain, Egypt, Asia Minor, and Italy. About a million Jews resided in Egypt, with over 200,000 in the city of Alexandria alone. Some two million Jews lived beyond Roman borders to the east as far as India and south into Ethiopia. About one million lived in the land of Israel, referred to as Eretz-Israel, residing in Galilee and Judea.

The Gospels introduce a Jewish motherland afflicted with widespread poverty and sickness wherein the common people lived in misery, suffering and despair. Physical and mental illness was not uncommon. A heavily taxed population resenting Gentile dominance yearned for freedom.

#3 – His Pre-Existence and Birth Preparations

#5 The Temptation and His Travel to Capernaum

#6 First Cleansing of the Temple and Nicodemus Questions Christ

#7 Jesus Departs Judea, in Samaria at Jacob’s Well and Sychar, and His Opposition at Nazareth

At the beginning of His ministry, “Jesus came to Galilee, preaching the gospel of the kingdom of God, and saying, ‘The time is fulfilled, and the kingdom of God is at hand. Repent, and believe in the gospel’” (Mark 1:14–15). The word “kingdom” means government. Jesus was talking about the coming government of God over this earth. He commanded: “REPENT, and believe in the gospel!” To “repent” means to be so sorry that you are not only willing to quit, but to turn around and go the other way. Of course we must repent of SIN. But what is sin? God answers: “Sin is the transgression of the law” (1 John 3:4, KJV). So we must repent of disobeying God’s Government — of breaking His LAW! Again, notice Jesus’ own inspired words on the subject: “Do not think that I came to destroy the Law or the Prophets. I did not come to destroy but to fulfill” (Matthew 5:17). In other words, Jesus in His own life perfectly performed the spiritual intent and purpose of God’s law. Why did He do this? Let God answer!

#7 – Parables of the Kingdom

#2 – Training of the Twelve

#4 – The Feast at Jerusalem

Jesus ate His last Passover meal in the “Upper Room” with His followers (Mark 14:15; Luke 22:12). Throughout the Apostolic Age, the ancient Church of God celebrated this event from the perspective of the night of this Last Supper. The symbols of this New Passover consisted of unleavened bread and wine (symbolic of Jesus’ broken body and shed blood). Jesus introduced these New Covenant symbols at the beginning of Nisan 14, the Tuesday evening before His death. The first-century order of service at the New Passover included a foot-washing ceremony followed by the ritual partaking of unleavened bread and wine. Early Christians continued to keep the New Passover, annually, at the beginning of the fourteenth day of the first month, called Abib anciently and Nisan in Jesus’ day, determined by the priestly lunisolar calendar. We call it the New Passover or Christian Passover herein only to distinguish it from the Passover of the Jews, which was observed at the beginning of Nisan 15. The first Christians presumably simply referred to it as Passover. It’s important to note that the followers of Jesus kept the very first Christian Passover on a Tuesday evening, a full twenty-four hours before the traditional Jewish Passover on Wednesday night. The Christian Passover was set as an annual event, at the beginning of the fourteenth of Nisan, observed at the hour set by Jesus. It is vitally important that we understand the significance of the Passover.

#2 – The Garden of Gethsemane

Please log into your learning portal and enroll in this class for free.

You can watch and listen lectures with our app (more information).

Who are the programs intended for?

The online program is for members and attending prospective members of the Living Church of God. There are no age restrictions beyond the ability to read and study the Bible. Internet access, an individual email address and a MyLCG account are required.

How much does the online program cost?

The goal of the Living Church of God is to provide educational materials for its members at no cost; therefore, there is no tuition charge to take a Living Education-Online course.

Am I able to move through the online course at my own pace?